TATTOO ON HEAD AND SLEEVE

A few decades ago, a man with a tattoo on his head would be considered a dangerous antisocial element, but nowadays male tattoo on his head is a normal practice for fans of tattoo art. Nevertheless, the choice of such a place for the location of the drawing is still considered quite specific – not everyone can do it. Often a tattoo on the head is made by people who are engaged in creativity, in a word, whose work does not involve a strict dress code.

PLUSES AND MINUSES OF TATTOO ON THE HEAD

It’s no secret (even for the tattoo lovers themselves) that tattooing is a great way to attract the attention of conservative inhabitants. Nevertheless, not all fans of tattoo art want to put their body on public display. The art for this kind of people is something very personal. They choose places for their tattoos that are easy to hide under the clothes (thigh, back, shoulder blades, shoulders). The Picture on the head (especially the tattoo on the temple head) can not be hidden even under the headdress. Therefore, before deciding on such a bold move, it is worthwhile to weigh thoroughly the pros and cons. And when a fleeting excitement will pass, then you can seriously regret your choice. Modern technology, unfortunately, does not yet allow to remove unsuccessful tattoos completely: and the picture can still remain.

However, for unsuccessful tattoos on the head there is another solution – they can easily be hidden under the hair. The exception is made by balding people who want to distract attention away from an unsightly picture with their lost hair. There is another great outlet for bald people: a tattoo of hair on the head. It’s no secret that many men suffer in adulthood from hair loss. Many of them are complex about this, but hair transplantation is not an expensive pleasure, not even all Europeans can afford this procedure, the cost of which is estimated at thousands of dollars.

FEMALE WOMEN TATTOO ON THE HEAD

Tattoo in the form of a bright colorful flower, no doubt, will adorn any girl, regardless of the place of its application. Especially popular for this kind of work are using techniques of performing tattoo, like watercolor and realism. For example, red buds of roses will perfectly complement your image in the summer, and in winter you can grow hair, hiding your drawings from extraneous views.

Winged expressions in Latin, executed in an unusual font, definitely enjoy great popularity among the beautiful half of humanity. The most popular places for inscriptions in girls are the forearm, wrist, shoulder blades, the outer side of the foot. Uncommon and strong personalities can dare to stuff something like that behind an ear or on a shaved temple. 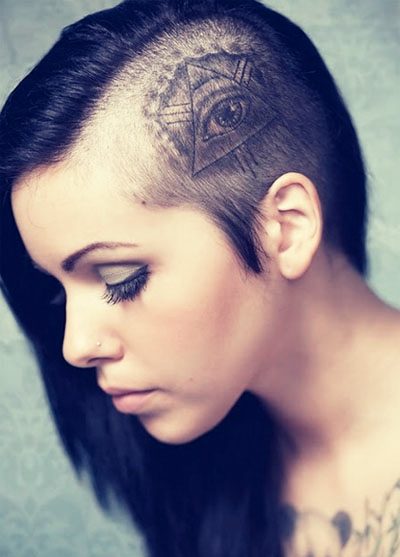 Works of this kind are mainly the prerogative of girls from informal circles, namely, fans of steampunk style. Figures in the form of complex mechanisms and intricate gears will look great on the shaved head of the steampunk fan. Often such tattoos become an excellent addition to the bright Iroquois. 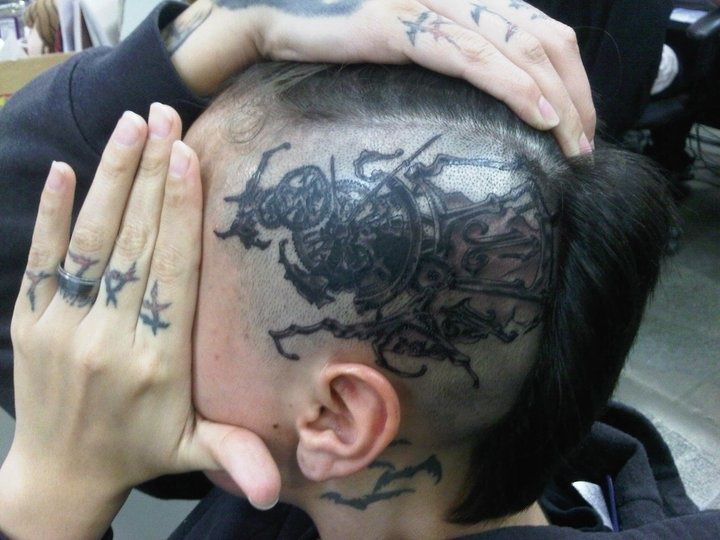 The style of ornamental tattoo is one of the most ancient. European seafarers had the pleasure to contemplate such tattoos on the Polynesian natives. Drawings in the style of an ornamental are usually not distinguished by a riot of colors. Often they depict animals, flowers, bizarre patterns. Another characteristic feature of the ornamental pattern is the clear lines of contours. There are many fans of this old and unusual style in the world. These tattoos look great on any part of the body, even on the head. Animals tattoo on the head

To dare to beat a tattoo on your head, you need to be a really strong person. As a rule, the essence of such people invariably breaks, which is expressed in an unusual appearance. For this reason, images of animals are very popular among strong and strong-willed girls, the characteristic features of their behavior reflect their essence. The most popular sketches, corresponding to this subject, are predatory fish, wild cats, dogs. The tattoo on the head is considered the most painful. Therefore, it is extremely important to weigh the pros and cons before deciding to take such a responsible step. In this case, you should have at least some idea of the peculiarities of the perception of pain by a particular person. The cost of this work depends on the style of the picture, its size and complexity level. As a rule, quality determines the price. The work of a well-known, well-proven master can not be cheap.

Tattoos as a lifestyle – models showed their drawings on the...

Hand made outline for tattoos Sketches that people have already tested on themselves Tattoo on the Head