Tattoo Aries, like other zodiac signs, is a very popular drawing among young people and among adult tattoo lovers. It is necessary to understand that such an image on the body means not only the person’s belonging to this or that sign, but also reflects its character, as a whole carries a deeper meaning.

Constellation of the ram in the tattoo

Aries is the first sign of the zodiac for the account. Traditionally, he is associated with a sheep, which means with courage, vitality and courage. In addition, this sign of the zodiac refers to the elements of fire. Accordingly, people under this constellation are quite active, quick-tempered and impulsive, they always go to their goal and achieve considerable heights. Often it is also open in communication, straightforward personalities. It is these positive qualities of human tattooers that seek to convey in a tattoo with the sign of the zodiac Aries.

What does Aries tattoo mean?

Usually Aries tattoo is of individual importance for each person. This may be the desire to express their originality and feature, emphasize belonging to this sign of the zodiac, convey their own traits in the tattoo, or simply decorate the body with a beautiful picture. Sometimes young couples fill the zodiac signs of each other, then such sketches symbolize love and mutual understanding, support each other.
Tattoo in the form of a zodiac sign Aries means inner strength, masculinity, willingness to fight with obstacles. It is a symbol of moral strength and a sign of the winner. The drawing is also intended to emphasize the brightness of the owner, his love for tattoos and bold decisions. Decisiveness, courage, willingness to always come to the rescue and responsiveness can also be associated with such a sketch.

If, for courageous and purposeful people, such a tattoo is a kind of support, a reminder of the inner strength of the spirit, then for a man of weak, inert and indecisive Aries tattoo can be a protection, support, a symbol that will guard against problems and failures.

Many people worry about the wrong treatment of tattoos, which is associated with prison tattoos. In fact, artistic tattoo does not matter, in addition to the one that the owner of the image puts into the sketch. In addition, the tattoo of the Aries sign has no resemblance to prison tattoos and can not be misunderstood by the people of the criminal world. The sign of the zodiac directly indicates only the belief of man in the power of the constellation and his fate.

Where is usually tattooed in the form of a zodiac sign Aries?

The successful location of the tattoo of the zodiac Aries depends on the particular sketch and meaning that the image owner puts in such a picture. For example, the ram will look good on the back on the shoulder blades, on the inside of the shoulder, on the ribs or well placed on the male breast. The sign of Aries is a drawing that is often depicted in the form of a letter V with curved horns. Such a sketch is better to fill on the wrist and higher on the forearm, on the neck, under the collarbone, under the breast. Variations are many, but before drawing a picture, it is worth considering what kind of meaning it should carry in itself.

Tattoo constellation Aries is no less popular. This is a small and neat option, so it is simply lost on a large “square”. It is not recommended to beat the constellation on the abdomen, legs, back, shoulders, etc. In this case, a beautiful idea from afar can look just like dark spots. It is much better to place a constellation on the wrist, palm, foot, under the collarbone, on the neck and in other places, small in area.

The photo shows that the tattoo of the zodiac sign Aries is usually not depicted in an inverted form. But do not worry that because of the placement of the symbol, for example, on the wrist, a tattoo can have a dual meaning. Regardless of whether the sign is directed “high” towards you or “looks” at the palm, Aries tattoo will have the same meaning as described above.

In what colors are Aries tattooed?

Since a tattoo with such an image usually has to convey determination, courage and even some aggression, then the colors for the sketch are chosen corresponding: black and red. If a person is not typing a sign and not a constellation, but trying to come up with an original sketch and stuff a ram, then the color scheme of the picture may be different, depending on the small elements and the value of the Aries tattoo for a particular person.

Since the value of such a tattoo is vague enough and can be ambiguous, then often girls and men are stuffed with such a tattoo for different purposes.

Men’s tattoo Aries usually emphasizes man’s manliness, his moral and physical strength, his willingness to actively defend his position and fight difficulties. Guys in this manner try to prove to the whole world that they will achieve unprecedented heights and are ready to take the initiative and even break into battle. The meaning of the tattoo Aries for men is directly related to the aggressive “character traits” of the ram, its symbolism.
Tattoo Aries for girls plays a slightly different role. Fragile women try to find support in various matters in this picture on their body, think that the tattoo will protect the owner from obstacles on the way to the goal, problems and enemies. Aries in this case acts as an amulet or a mascot.

There is also some difference in the sketches, the color scheme in male and female tattoos. In the photo of a tattoo, the sign of the zodiac Aries can be seen that on the female body more often small and neat drawings are painted, usually a sign or a constellation, often in warm or bright shades. Men prefer a more strict option, choosing for themselves sketches with a sheep or a large symbol, usually in traditional black and red colors.

For the tattoo Aries can be selected different pictures as a sketch. From this, respectively, and will determine the style of the tattoo. If the idea is large enough and a person wants to depict the head of a ram, the tattoo master can advise such styles as realism, trash polka, artwork, graphics, watercolor (in combination with other techniques), gothic, oriental and others. For a tattoo with the sign of Aries (V with bent horns), the inscriptions Aries (translated from Latin “Aries”) or constellations will suit and the options are simpler: a traditional black and white image, graphics and oriental, and in some cases a “playful” handbook. In the photo below you can see what the constellation of the ram in the tattoo looks like, as well as other versions of the image of this zodiac sign on the body.

Aries Tattoo and other symbols

The image of the ram is most often depicted independently, as the sketches are quite large and do not require additions. However, girls can decorate the horns of an animal with a wreath of flowers, the ornamental images look “in the company” with intricate patterns, and the tattoo in the style of the artwork is perfectly combined with the elements characteristic for this style: dot patterns and symbols, geometric figures, etc.

The inscription Aries in Gothic or other strict type usually also does not require additional elements. On the other hand, when you represent a word in the form of a calligraphic inscription, it can easily be supplemented with other popular signs (infinity, hearts, etc.), a wavy line under the phrase or colorful flowers.

The symbol of Aries is portrayed more often than other sketches of this sign of the zodiac. Accurate letter V is packed large enough and in black, sometimes it can be supplemented with a small graphic image of a ram, an inscription with the name of the sign of the zodiac, asterisks, fire, wood, but such variants are infrequent. 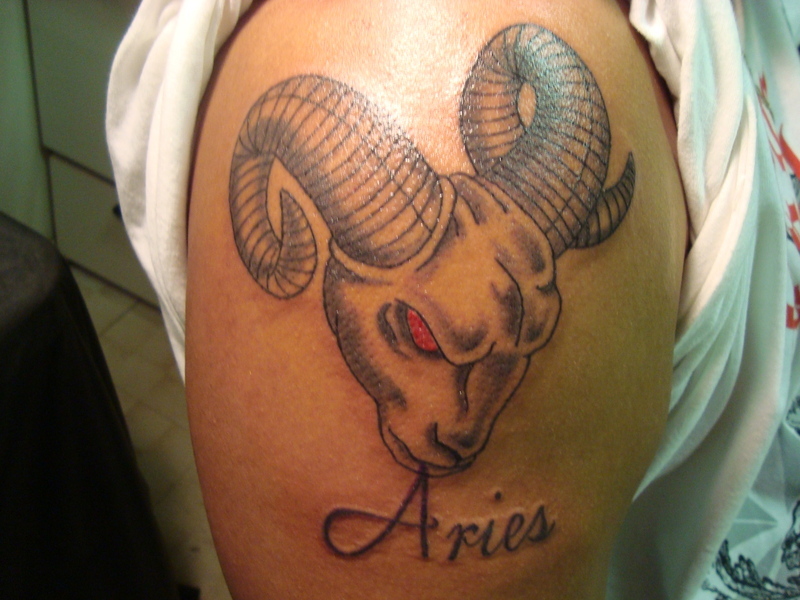 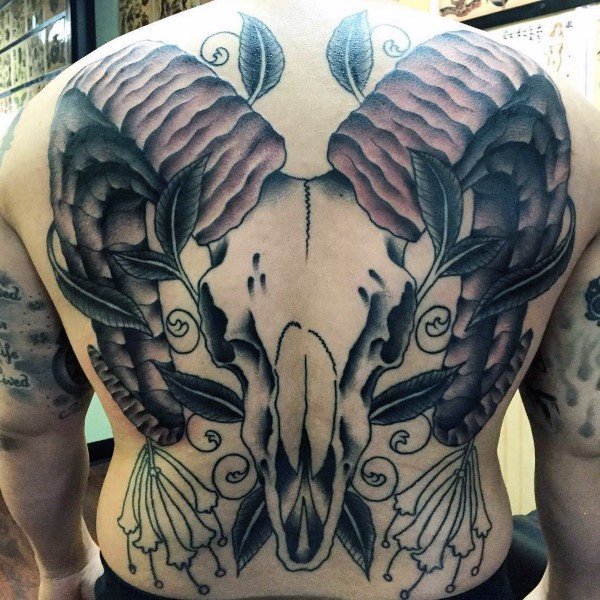 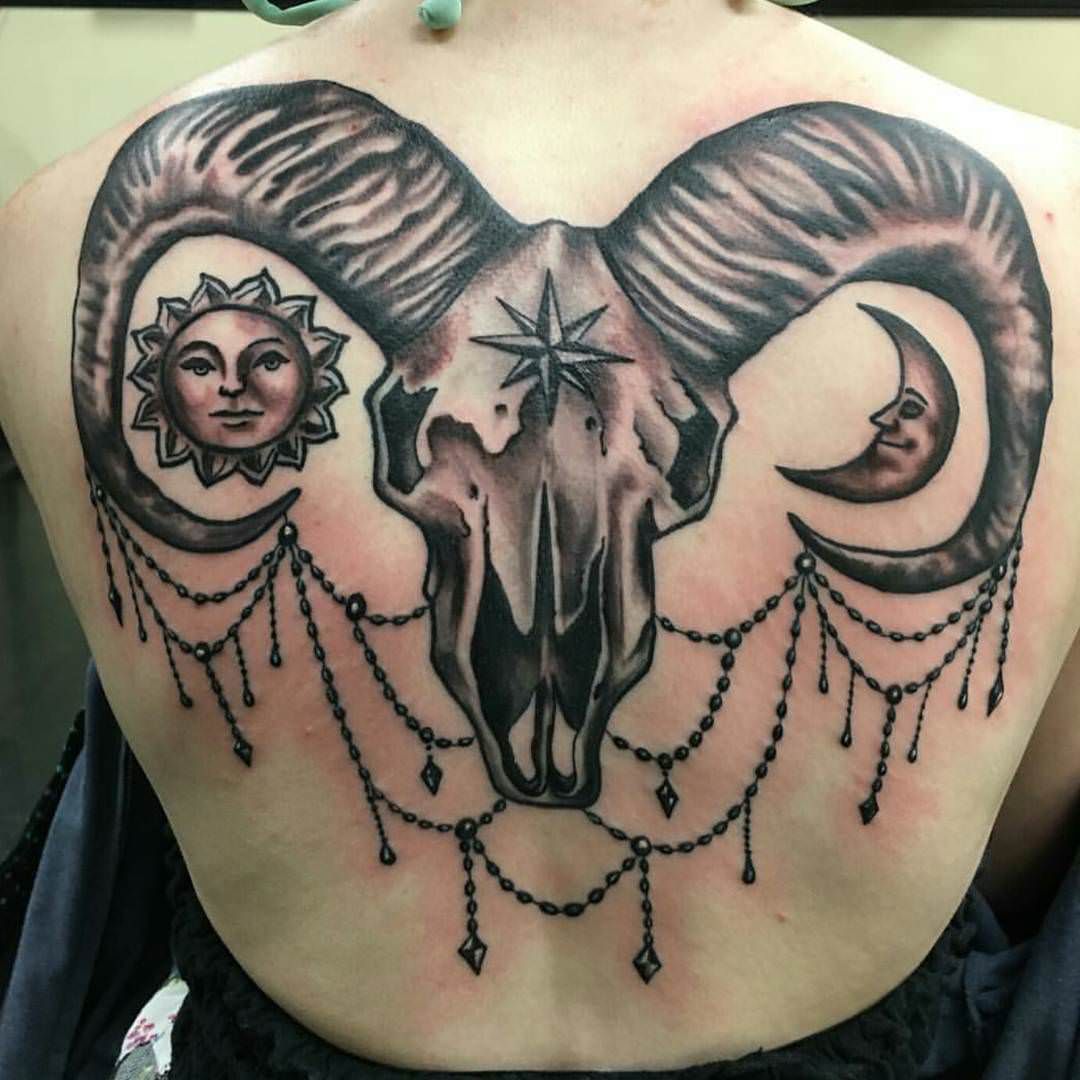 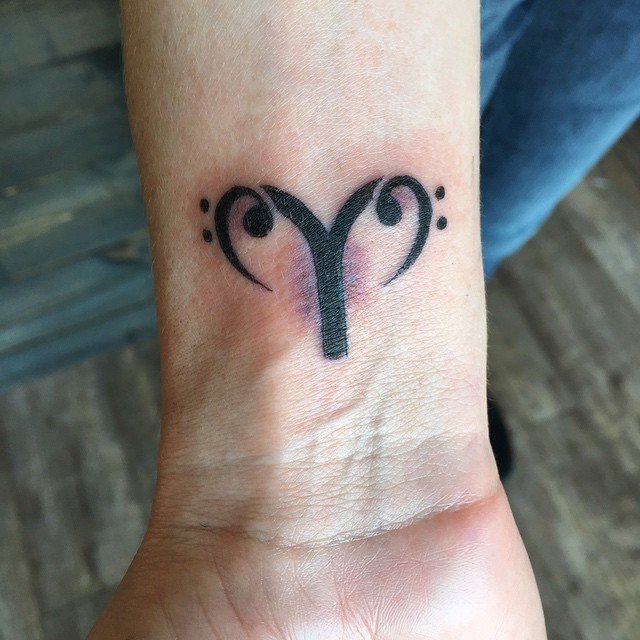 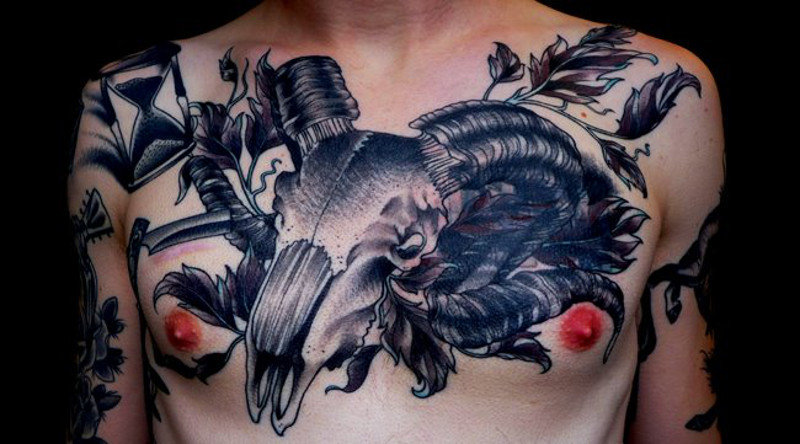 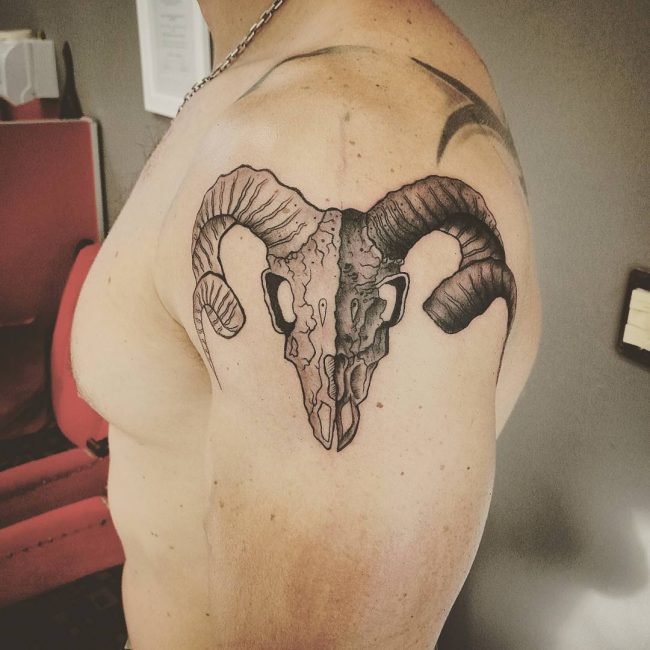